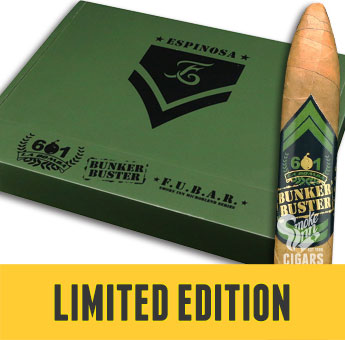 In the same way a graphically charged summer blockbuster can have audiences rethink the way they perceive explosive visuals, cigar enthusiasts are about to have their smoking palates readjusted. In other words, forget everything you know about the once-mild Connecticut... as the 601 La Bomba Connecticut Bunker Buster - FUBAR is set to unleash unheard-of flavors on the uninitiated!

Following in the footsteps of the fan-favorite 601 La Bomba Bunker Buster cigar—originally released in 2014—the updated Connecticut-wrapped sequel has been crafted to flip the concept of "your daddy’s Connecticut" on its head. Like the original, the FUBAR has been rolled in a special bunker-busting Perfecto format, allowing for an ever-changing profile from start to finish. But where the original showcased a more traditional Habano wrapper, the FUBAR offers a smooth and creamy Ecuadorian Connecticut cover leaf. This delicate ingredient is then combined with a spicy binder and Nicaraguan fillers from the country's Estelí and Jalapa regions. All told, it's a juxtaposition of flavors that effectively cradles the palate... then punches it IN THE FACE!

Marking the 14th cigar in Smoke Inn's long-running Microblend Series, 601 La Bomba Connecticut Bunker Buster - FUBAR is jam-packed with hidden features and significant meaning. The name "FUBAR" stems from WWII terminology (as does the Bunker Buster theme in general), meaning "F*#ked Up Beyond All Recognition." Additionally, FUBAR brings quite the unique packaging to the table. In each 10-count box, every cigar is individually boxed in singular coffins, with colorful artwork adorning all four box sides. When the cigars are aligned side by side, a complete piece of military artwork will be revealed to cigar enthusiasts (there are four possible images). Smokers are then encouraged to place the artwork in the original box, which can be displayed easily on lounge walls.

With only 500 boxes of 10 FUBAR cigars in existence, we recommend acting quick on this limited sale. Because after this summer, smokers may never look at Connecticuts the same again.

Size:
5.5 x 56
Pack:
10
Country of Orgin : Nicaragua
Strength : Full
Wrapper : Connecticut
Ask a question about this product
You will be added to the Connoisseur club wiating list.
Do you want to continue? :
Please Add me No