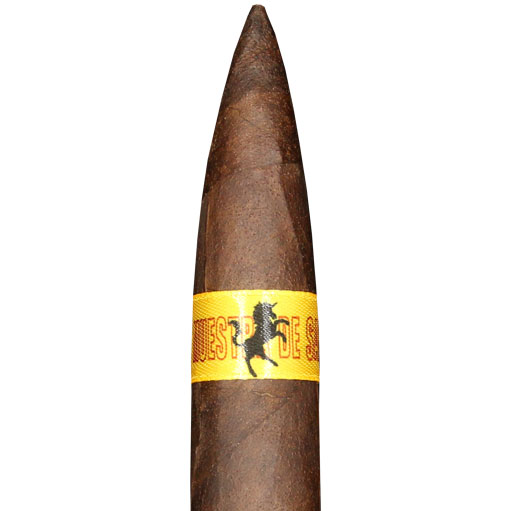 Muestra de Saka is a limited series under the DTT stable, consisting of experimental blends/sizes, treating smokers to a peek behind the curtain of Saka's tobacco-blending prowess. Each release consists of a singular blend in a singular size, determined to be the ideal embodiment of each creation. But no Muestra de Saka has since topped the desirability of the Muestra de Saka Unicorn.

The MdS Unicorn spares no expense at every excruciating detail of the cigar making process. This includes the selection of only the top 1% of Grade-A Broadleaf for the cigar's wrapper, as well as all-Nicaraguan binder/fillers. Saka acquired 6,000lbs of the finest such tobaccos before whittling down to only the cream (of the cream) of the crop! Saka himself purchased a lathe and learned woodworking in order to hand-carve the shape for which molds were made to form the cigars' 6¼" x 60 diademas shape... as mentioned, no expense spared. The result is what Saka deems "one of the finest Broadleaf cigars ever crafted."

Unsurprisingly, only an extremely limited number of MdS Unicorn cigars are crafted annually (they don't call it Unicorn for nothing!), making this one of the world's most sought-after smokes (by collectors and connoisseurs alike) in existence.

Size:
6.25 x 60
Pack:
1
Country of Orgin : Nicaragua
Strength : Medium-Full
Wrapper : Maduro
Ask a question about this product
You will be added to the Connoisseur club wiating list.
Do you want to continue? :
Please Add me No