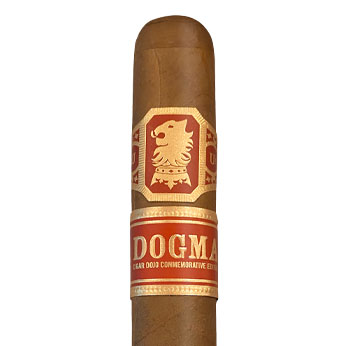 Since 2014, the Undercrown Dogma has been widely thought of as the unofficial "King of the Undercrown," being originally released as a special collaborative project between Smoke Inn, Cigar Dojo, and Drew Estate. Dogma was an instant classic, offering up an incredible amount of flavor and body by amping up the original Undercrown Maduro blend and allowing the high-priming tobaccos a better melding process due to the cigar's box-pressed shape. Once regarded as among the most sought-after unicorns within the Drew Estate stable, it was only a matter of time before the fan-favorite Dogma received a proper sibling.

Enter the Undercrown Sun Grown Dojo Dogma, marking the first time that the legendary Dogma concept has branched out into non-maduzro territory. Like the original, the Sun Grown Dojo Dogma plays on a core-line blend within the Undercrown collection, this time being based on the award-winning Undercrown Sun Grown cigar. The cigar makes use of a similar tobacco recipe, boasting an Ecuadorian Sumatra-seed sun-grown wrapper, a Connecticut River Valley stalk-cut sun-grown Habano binder, and all-Nicaraguan fillers (including highly aged ligero from Nicaragua’s unique Nueva Segovia region). Of course, the blend has been Dogma-fied, selecting higher leaf primings for added oomph and body, as well as receiving a hearty box-press. Along with the changes comes a new size and packaging, being rolled in a stout 5″ x 54 format (as opposed to the Toro Grande of the original) and ditching the paper packaging for fun-sized wooden boxes of 24!

Though a limited number of Undercrown Sun Grown Dojo Dogma have been rolled for the 2020 inaugural release, we at Smoke Inn our proud to kick off the festivities with a swag-filled launch you won't find anywhere else! This includes custom-branded Undercrown Sun Grown Dojo Dogma gear such as cutters, lighters, & travel humidors! Swag ships first-come, first-served while supplies last. It's time to stock up on DOGMA!

Size:
5 x 54
Pack:
5
Country of Orgin : Nicaragua
Strength : Medium-Full
Wrapper : Sun Grown
Ask a question about this product
You will be added to the Connoisseur club wiating list.
Do you want to continue? :
Please Add me No