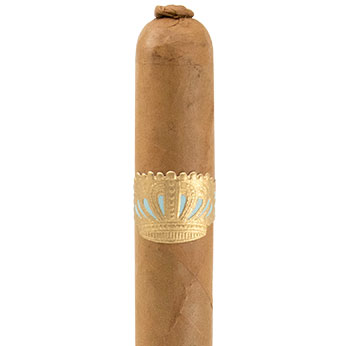 In 2019, Dunbarton Tobacco & Trust introduced a blend style that few thought would ever become a part of the company's maduro-heavy portfolio: a Connecticut Shade-style cigar. Differing from the industry trend of all-things new, company owner, Steve Saka, reversed course, blending the Sobremesa Brûlée after the mild-mannered Connecticuts he first enjoyed throughout the '80s and '90s. But Saka wasn't finished yet, as he had stowed away a special variation of the blend to be released at a future time... and that time is NOW!

Introducing the Sobremesa Brûlée Blue, a refined rendition of the already sophisticated Sobremesa Brûlée blend. For Sobremesa Brûlée Blue, the cigars have been crafted to resemble the characteristics of one of Saka's all-time favorite smoking experiences—a Cuban-made Davidoff Dom Perignon circa the mid-1980s. Arriving in Saka's hands with over a decade's age, he describes them as "so smooth, so subtle yet complex, creamy, sweetness, touches of cafe and almond butter."

Setting out to recreate the desired level of complexity, Saka had the Brûlée blend rolled in a 6¼" x 46 format. This includes the use of all-Nicaraguan fillers, a Mexican San Andrés Negro binder, and a high-grade Ecuador Connecticut Shade "G2BW" wrapper. This concoction was tweaked again and again, slowly homing in on the elusive profile Saka desired. And when achieved, Saka went the extra mile by setting the Sobremesa Brûlée Blue aside for one full year, with only 1,000 boxes making their way to consumers for the cigar's debut. Mild to medium in body, the Sobremesa Brûlée Blue offers the quintessence of nuance and refinement, delivering exceptional characteristics of browned butter, creamy nuts, sage, vanilla bean, and layers upon layers of sweet cream.

Size:
6.25 x 46
Pack:
5
Country of Orgin : Nicaragua
Strength : Mild
Wrapper : Claro
Ask a question about this product
You will be added to the Connoisseur club wiating list.
Do you want to continue? :
Please Add me No