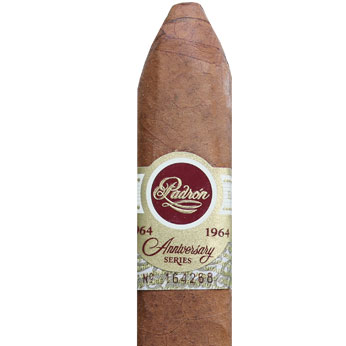 Once a limited edition size for the Tobacconists Association of America TAA Exclusive Series, Padrón has now made the 1964 Anniversary Series Belicoso a regular size in their famed 1964 collection.

This, the Maduro-wrapped 1964 Belicoso, uses a Nicaraguan sun-grown wrapper, aged four years. The blend incorporates the world-renowned 1964 Anniversary Series recipe, which has been slightly tweaked for this special size. Expect a medium/full smoking experience, filled with a “flavor bomb” profile of roasted coffee, aged tobaccos, sugar-coated nuts, and a hearty earthiness. The Belicoso cap allows for more preference on the initial cut and provides a concentrated smoke onto the palate - making for one of the most flavorful offerings in this legendary series from Padrón.
Size:
5 x 52
Pack:
5
Country of Orgin : Nicaragua
Strength : Strong
Wrapper : Maduro
Ask a question about this product
You will be added to the Connoisseur club wiating list.
Do you want to continue? :
Please Add me No