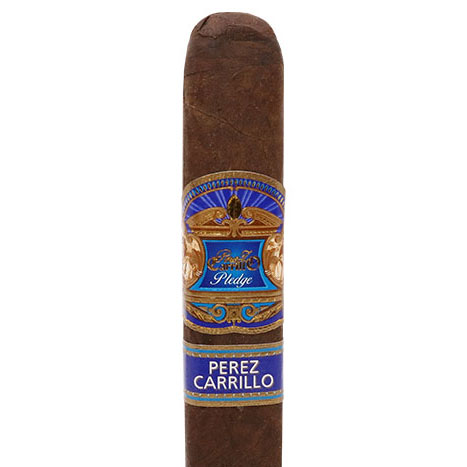 Since debuting the Perez-Carrillo Series in 2014 with the launch of La Historia, EPC Cigars has consistently offered some of the most highly ranked cigar blends in the realm of premium cigars, including the No. 2 Cigar of the Year in 2014 with La Historia and the prestigious honor of the No. 1 Cigar of the Year in 2018 with the Encore. Setting out to deliver a proper addition to such an acclaimed collection, Master Blender Ernesto Perez-Carrillo has crafted an equally impressive smoking experience with a cigar known as Pledge.

Since the beginning, the Perez-Carrillo Series has honored the Carrillo family's history in the world of tobacco, with La Historia paying tribute to the women in the family, and the Encore being a nod to both Ernesto's musical aspirations as well as his grandchildren. For the Pledge, the cigars are made in appreciation of the company's diehard fans over the years, as well as Ernesto's tobacco-blending journey throughout his life. As such, the cigars have debuted alongside his milestone 50th year in the premium cigar industry, appropriately celebrating one of the few men to reach the Cigar Hall of Fame status.

In setting out to craft a cigar of such high expectations, Ernesto Perez-Carrillo did not take the task lightly. Over six months of trial and error were spent finding the proper blend. This began with the selection of a unique Connecticut Havana wrapper, a leaf that Ernesto had become fond of during the early '80s. This wrapper has been combined with an Ecuadorian binder and all-Nicaraguan fillers, with the recipe being finalized with a box-press. The resulting experience lives up to the high expectations of Perez-Carrillo cigars, offering a medium/full intensity and long-lasting complexities of red pepper spice, hickory, candy-covered chocolate, aromatic botanicals, nougat, and a dark underbelly of ripe stone fruit.

Size:
5 x 50
Pack:
5
Country of Orgin : Dominican Republic
Strength : Medium-Full
Wrapper : Natural
Ask a question about this product
You will be added to the Connoisseur club wiating list.
Do you want to continue? :
Please Add me No